According to the American Thyroid Organization, an estimated 20 million Americans are suffering from some form of thyroid disease.

Thyroid issues are also more common in women with them being 5 to 8 times greater than men to develop a condition.

About 12 and a half percent of women (1 out of 8) women will develop a thyroid disorder in her lifetime.

Though thyroid diseases are more prevalent in women, men are also still at risk for a thyroid condition.

Some are fortunate enough to have telltale signs that something is wrong but others see no signs or symptoms. This is the case for 60 percent of sufferers [R].

Others may not be as lucky and show no symptoms at all. This can be a big problem since thyroid conditions are very serious. If left untreated they can put people at risk for a ton of health conditions like cardiovascular disease, osteoporosis, and infertility in women.

This blog post explains how the thyroid affects overall health, the conditions that can occur, and the various symptoms that may tell there is something wrong.

The thyroid also produces, stores, and releases hormones into the bloodstream to be delivered to cells. These hormones are called Triiodothyronine (T3) and Thyroxine (T4). These hormones are made from the amino acid tyrosine and the mineral iodine which must be acquired through diet.

Hormone balance is important and the levels of these compounds should not be too HIGH or too LOW.

Production and secretion of thyroid hormones are controlled by the pituitary gland. When the brain senses thyroid hormone levels are too low or too high it will send out a hormone called thyroid-stimulating hormone (TSH) telling the thyroid to create or stop production of T3 and T4.

TSH will be released into the blood when T3 and T4 are LOW to tell the thyroid that body cells need more thyroid hormone. This will result in a LOWER heart rate and may cause constipation and weight gain.

The thyroid that does not produce enough T3 and T4 is considered UNDERACTIVE. It is also known as HYPOthyroidism. Symptoms include the following:

When T3 and T4 are too HIGH TSH production will decrease and thyroid will slow production of its hormones. This may result in a RAPID heart rate, diarrhea, and weight loss

A thyroid that is producing too much thyroid hormone is OVERACTIVE and known as HYPERthyroidism. Symptoms include the following:

Aside from Hypo- and Hyperthyroidism, other thyroid conditions that you should be aware of are thyroiditis, Hashimoto’s Thyroiditis, Grave’s Disease, iodine deficiency, and goiter.

Thyroiditis refers to any disorder resulting in inflammation of the thyroid. Some examples include postpartum, subacute, and Hashimoto’s thyroiditis.

Postpartum thyroiditis occurs after labor resulting in temporary high levels of thyroid hormone followed by low levels which will eventually lead to hypothyroidism.

Subacute thyroiditis is inflammation due to a virus. It causes pain in the thyroid and is accompanied by fever.

Hashimoto’s thyroiditis is the most common cause of hypothyroidism in the United States. This is a chronic autoimmune disease that occurs when the body’s own cells start to attack and destroy the thyroid gland. As the thyroid is attacked less and less hormone will be produced. This condition tends to be hereditary and runs in families. While it is seen mostly in middle-aged women it may occur at any age and also can affect men and children.

If the thyroid becomes enlarged or inflamed or there is little hormone production treatment may be needed. Good nutrition is essential for this condition.

Grave’s disease is named for Robert Graves, an Irish physician, who discovered the disease about 150 years ago. It occurs when the thyroid gland is in a state of overactivity or hyperthyroidism. This disease can also manifest in the eyes.

Known as Grave’s Graves’ Ophthalmopathy or Thyroid Eye disease is an autoimmune disease caused by antibodies directed against receptors present in the thyroid cells and also on the surface of the cells behind the eyes.

It develops in up to one-half of people with Grave’s disease. While Grave’s disease is an overactive thyroid issue, some cases have resulted in hypothyroidism.

Developing eye problems is very rare but may occur up to six months after diagnosis. In most cases, they are usually mild and can be treated. Symptoms include

Loss of vision rarely occurs.  It is important to note that the severity of eye problems is not related to hypothyroidism.

Iodine deficiency occurs when the thyroid does not get enough iodine. As stated earlier, T3 and T4 hormones are made from iodine. If the body is lacking iodine not enough thyroid hormone will be produced and hypothyroidism may occur. Worldwide, iodine deficiency is the cause of hypothyroidism.

According to the American Thyroid Association, the best way to determine iodine deficiency is to measure iodine in the urine. Deficiency is defined as a median urinary iodine concentration of the following [R]:

If the body does not create enough iodine it will need to get adequate amounts from the diet. Eating sufficient levels of iodine is a way to improve deficiency. The Institute of Medicine recommends a daily allowance of 150 μg per day for adult men and women [R].

Overall, iodine deficiency is a major issue in countries that are lacking in iodine-rich foods as part of their diet. Forty percent of the world is at risk for this deficiency including parts of Europe, Africa, and Asia.  Iodine deficiency in pregnant women can result in mental retardation in infants and children [R].

Iodine is present in soil and seawater however, the availability of iodine in food varies from region to region. Iodine is found in the following foods:

Unfortunately, the iodine content is not listed on food packages so knowing how much you are consuming may be difficult to determine [R].

Iodine was first added to salt in the 1920s after an outbreak of goiter occurred in the Great Lakes, Appalachian, and the Northwestern United States. In order to wipe out iodine deficiency iodine was added to table salt.

Iodized salt produced positive effects on iodine deficiency in the 1920s, but iodine levels have dropped by about half between the early 1970s and early 1990s. Recently, a mild iodine deficiency has also been seen in pregnant women [R].

Even with iodized salt, Americans are still at risk for an iodine deficiency due to dietary factors including a high processed diet, veganism, and consumption of chlorinated and fluoridated water [R].

Typical table salt is often overly processed with chemical preservatives and even sugar. Pre-prepared foods often have a high content of these processed salts. Foods high in these types of salts should be limited in the diet.

A good alternative to processed salt is Celtic sea salt. This contains traces of iodine. Seaweed and kelp are also good sources of this mineral.

Related: Find out which foods have the most iodine

Supplementation is another way to get iodine, however, too much iodine can cause deficiency symptoms, thyroiditis, and thyroid cancer. Other symptoms include burning of the mouth, throat and stomach, stomach pain, nausea, vomiting, diarrhea, weak pulse, and coma. The daily upper limit for adults is 1,100 micrograms per day. Iodine supplementation can also cause interactions with the following medications [R]:

Iodine deficiency can cause also cause Goiter [R].

Goiter is when the thyroid gland becomes enlarged. Goiter occurs in a thyroid that is producing too much, too little hormone, or just the right amount of hormones. Without enough iodine, the thyroid will grow bigger as it tries to keep up with the demand for the production of thyroid hormones.

Goiter could be a result of iodine deficiency, Hashimoto’s thyroiditis, or Graves’ Disease. However, an enlarged thyroid does not always mean it is diseased.

Nodules can also develop in goiter. This can lead to choking along with difficulty swallowing and breathing.

Worldwide, iodine deficiency is often the most common cause of thyroid enlargement and goiter.

Asymptomatic with No Signs or Symptoms

Often there will be no pain or symptoms which can result in a thyroid condition going unnoticed for years. Thyroid issues are becoming a big concern for Americans. Everyone can benefit from getting a screening even if they are are not experiencing symptoms.

Women who want to become pregnant are at risk of miscarriage, pre-term delivery, and severe developmental issues in their children.

There are many different thyroid conditions. Some sufferers will have signs and symptoms of while others will have no idea what is happening to them. It is very imperative to get annual testing even if you have no symptoms. Many will have no idea they have a condition until it is too late. Not sure what to test for? Find out what blood tests you need to get done to know the health of your thyroid.

The information on this website has not been evaluated by the Food & Drug Administration or any other medical body. All website services, content, and products are shared for informational purposes only. Thyroid Nutrition Educators cannot provide medical advice, diagnosis, or treatment. Consult your doctor or healthcare provider before making changes to your diet, supplement, exercise, and or lifestyle. Learn more in our disclaimer.

2 thoughts on “Signs of a Thyroid Condition” 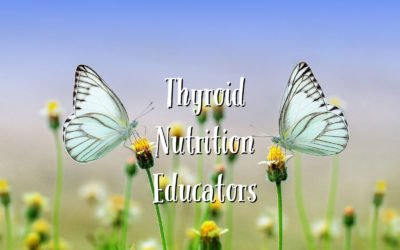 Thyroid Nutrition Educators is a professional website run by nutrition experts that educates dietitians and other allied health professionals on thyroid nutrition. We offer nutrition articles, along with client and clinical resources to help improve your client’s health. Learn more about us here.

Learn What Nutrients Help Thyroid Nutrition with Our FREE Guide 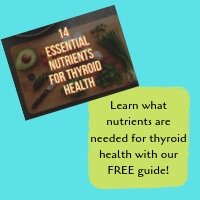 Thyroid Nutrition Educators is a participant in the Amazon Services LLC Associates Program, an affiliate advertising program designed to provide a means for sites to earn advertising fees by advertising and linking to Amazon.com

2 shares
Manage Cookie Consent
By using this website, you agree to our use of cookies. We use cookies to provide you with a great experience and to help our website run effectively. Learn More in Our
Manage options Manage services Manage vendors Read more about these purposes
View preferences
{title} {title} {title}
Scroll to Top